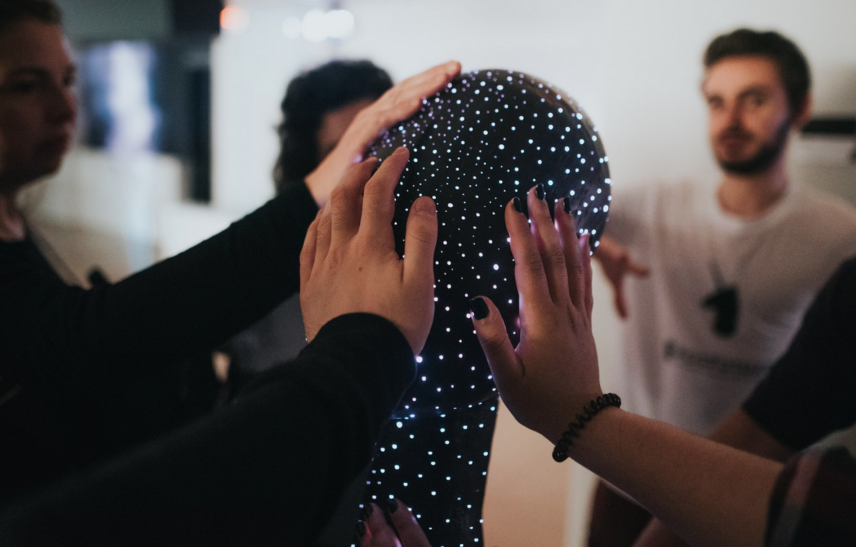 As part of the 2nd edition of the Sztuka do rzeczy – design in Krakow, dedicated to creative industries, the Photon Foundation will present the TOUCH ME interactive installation of the Greek artist and designer Yiannis Kranidiotis.

TOUCH ME sculpture invites you to touch it, emphasizing that direct contact in applied art is key.
The installation refers to the ancient Cycladic gods – the black head stands on the pedestal, like an extraterrestrial alien guest, waiting for a meeting with a human. At the time of contact, the sculpture comes alive and in response to touch emits cold blue and purple light, in the case of greater involvement warmer red and orange colors, through hundreds of optical fibers that are mounted on its surface. In the audio layer, a soundscape based on the movements of the hands touching the sculpture is simultaneously heard.
TOUCH ME is a metaphor for the relationship between man and technology. Trying to study the difficulties of human-machine interaction. Simple interaction, like touch, is sometimes very much hard to reach. People often hesitate to touch objects, sculptures. When they finally do this, some may feel uncomfortable due to the sculpture’s response, while others may feel attracted and enchanted. A reflection emerges of our relationship to human-machine interaction in times when we are surrounded by loads of everyday life interactive devices.

Yiannis Kranidiotis is a Greek artist and designer, studying the relationship between science and art, creating objects and installations using mainly light, movement and sound to create spaces and experiences where everything coexists and interacts. He is interested in physical phenomena such as harmonic oscillation, natural repetition and movement as well as researching and transforming scientific data such as new discoveries of exoplanets or solar wind properties. Much of his work includes movement and interaction, where others include data processing and sonification methods. This requires interdisciplinary work with sound, visual arts, coding, electronics and physics. He holds a bachelor’s degree in physics from the University of Patras and a master’s degree in optics from Essex University. His works have been presented at many festivals and exhibitions such as BOZAR (Brussels), Maintenant (Reenes, France), SPECTRA (Aberdeen, Great Britain), Made in NY Media Center (New York), FILE (Sao Paulo, Brazil), B- Seite Festival (Germany), Rome Media Festival, ISEA (2016 Hong Kong, 2015 Vancouver), MADATAC (Madrid), Lumen Prize Global Tour, Athens Digital Arts Festival, Onassis Cultural Center (Athens), LUNDA Gallery (St. Petersburg , Russia). Articles about his projects were published, among others including “Google Cultural Institute”, “The Creators Project”, “Arduino.org”, “Gizmodo”, “Open Culture”, “Hyperallergic”, “Bigthink” and “Konstvärlden”.